Checkout mises.org to get the epub/pdf copy. 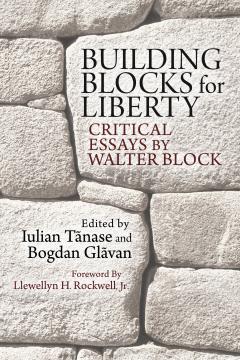 Walter Block ranks among the most prolific and provocative libertarian thinkers in human history. This volume fills an important gap in his corpus of writing: a series of accessible articles on cutting edge topics. His research and writing on roads, education, labor, secession, drugs, and money fill the scholarly journals, but these reductions bring this research to you in a format that is designed to persuade everyone.

The book therefore extends the logic of liberty in new directions, helping the reader to come to a radical understanding of the implications of economic liberty for the social and political order. His mind is sharp as a tack in dealing with conventional objections.

Block even tries his hand at taking on changes in language that subtly impact the position of liberty in our social and political lives, thereby picking up a project that Hayek had begun in the 1970s. Block alone seems to have seen the merit of this type of analysis and extended it into the age of political correctness.

What first appears to be an eccentric collection of unpredictable opinions on a large range of provocative topics turns out to be a compelling presentation of the logic of liberty applied to a series of practical issues that surround us every day.

One might see Building Blocks for Liberty as a bracing introduction to the power of libertarian logic to solve everyday problems.